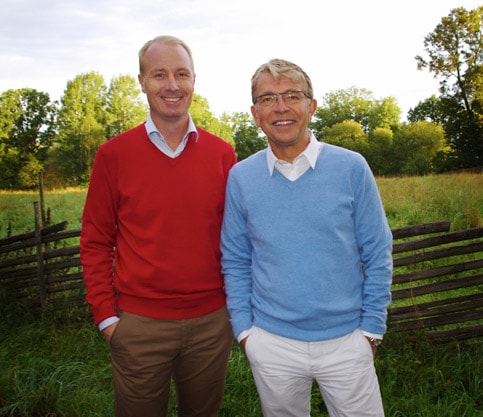 Peter Agnefjäll has been appointed Vice President of the IKEA Group from September 1st 2013. Mikael Ohlsson, who had taken on a 3-5 year assignment, has after 34 successful years within the IKEA Group, informed the board that he wishes to step down as President and CEO one year from now.
“IKEA has had a strong development under the leadership of Mikael, despite the tough economic environment. The current IKEA business direction, which covers the years until 2020, remains in place. Peter will continue to build on Mikael’s accomplishments and the solid introduction will allow him to prepare in the best possible way for his coming responsibilities.” says Göran Grosskopf, Chairman of Ingka Holding BV - the parent company of the IKEA Group.

Peter Agnefjäll, who is 41 years old, is today country manager of IKEA Sweden and has since 1995 held a number of leadership positions in the IKEA Group, in Sweden and internationally, within range development at IKEA of Sweden (IOS) and as store manager in Italy. In 2008 and 2009, Peter was assistant to Ingvar Kamprad, Anders Dahlvig and Mikael Ohlsson.

“I am very happy to welcome Peter as Vice President. I have had the privilege to follow Peter since he first joined IKEA and we have collaborated closely throughout the years. It will be a pleasure to work with him during the next 11 months to secure a good handover. Peter has a strong commitment to IKEA and our vision and is a good leader. I am confident that he, together with our dedicated co-workers, will continue to develop IKEA positively”, says Mikael Ohlsson.

Mikael Ohlsson (55) remains President and CEO of the IKEA Group until September 1, 2013, which is within the period originally agreed. He then plans to use his 34 years of experience at IKEA, mostly in senior operational positions and since 1995 in the executive management, in a board capacity in various businesses and organizations and spend more time with his family.

“I would like to thank Mikael for putting his soul into IKEA over 34 years, especially as CEO during these past important years. I am very happy that he has agreed to stay on for another year, to support Peter and secure a good IKEA transition” says Ingvar Kamprad.

“I really appreciate the good and stimulating cooperation with Mikael, and hope to work with him in one way or another also in the future”, says Jonas Kamprad, member of the INGKA board.

“I will have reason to come back with an acknowledgement of Mikael’s contributions and a fuller introduction of Peter, in a year’s time. Until then, it is business as usual”, says Göran Grosskopf.

Back to General news

Sharing this page means that you agree to IKEA's terms and conditions:

Inter IKEA Services B.V is the owner of the intellectual property, i.e, photos, text and all other content, on this website ('IISBV IP content'). Although you may share IISBV IP content on social media websites, i.e, blogs, forums, communities and other social networking websites, Inter IKEA Systems B.V does not grant, assign or otherwise relinquish its ownership.