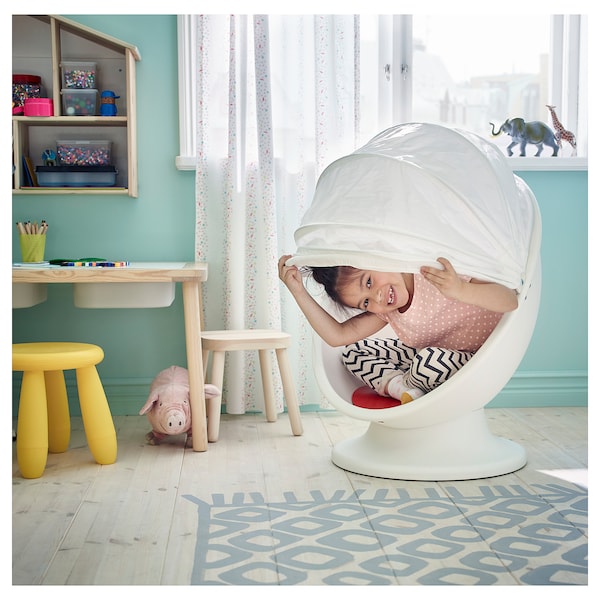 Round and round you go! Your child sets the pace – spinning slowly relaxes; spinning quickly develops the balance. When your child pulls down the hood, it gets a cosy hideaway.

With the hood pulled down the armchair is a secret hiding-place for the child.The fabric lets light in so it's never completely dark under the hood.Spinning round helps the brain to sort sensory impressions.Add a cushion or pad for more comfort.Please refer to packaging label for country of origin.Recommended for ages from 3 years.Designer

A cosy place with a twist

You probably know how childhood memories can stick and become almost magical snapshots in your mind. If you work at IKEA, these memories can inspire you to create new products. Like LÖMSK swivel chair. "As a child I was constantly doing handstands and I loved rocking and spinning. My father's armchair was enticing, so as an adult I had the idea that there should be swivel armchairs adapted for children," says our designer Monika Mulder. She wanted the chair to stimulate imagination, too. So she gave it a hood that can be pulled down to create a secret hiding place.  Read More
Since 2003, children throughout the world have spun, hidden and created their own cosy space in LÖMSK swivel armchair. Child psychologist Barbie Clarke, who has researched children and their development, has seen it act like a magnet to children. "Children love things that change into something else. It stimulates the imagination and gives a feeling of having magical powers. And spinning in the armchair is not just a fun game, it also contributes to important physical development,” explains Barbie. “When children climb, hang upside down, run, balance and spin, their sensory systems develop ─ particularly their balance.”

An armchair for more imagination and play

Today, Designer Monika Mulder has four children of her own. "In our home, it has been used as a toy stove, so that sometimes when the room is to be quickly cleaned, everything from the floor is hidden under the pulled down hood. Later in the evening, LÖMSK often looks like a glowing ball when one of the children sits inside it with a tablet." For Monika, the fact that LÖMSK is used in unexpected ways is positive. "In a pretend world, children can comfortably prepare for adult life ─ with nothing predetermined. It’s the imagination of children that decides what LÖMSK should be.”
Read less