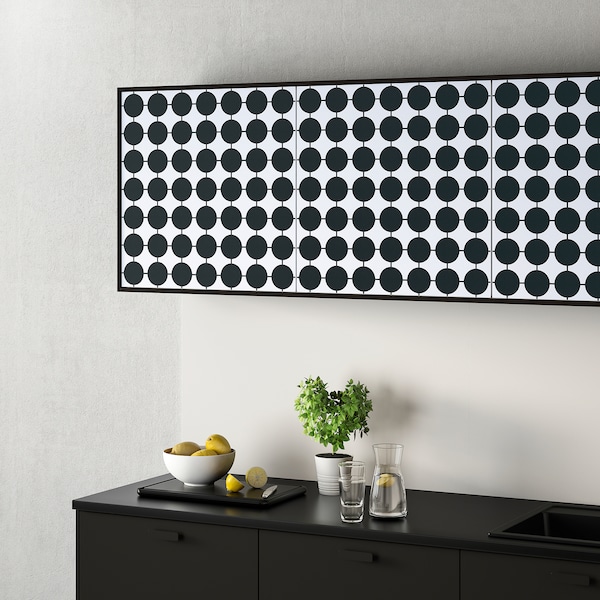 Decorate your kitchen with bold colours and shapes. The patterns on these kitchen doors, created by the ground-breaking Swedish design collective 10-gruppen, are strong graphic highlights in the kitchen.

The front can be hung at the left or right and rotated 180 degrees so you can turn the pattern to the position you like the most.The foil surface is impact-resistant, easy to care for and keep clean.25 year guarantee. Read about the terms in the guarantee brochure.YTTERBYN kitchen doors are available in 6 sizes with 5 unique graphic designs – so you can even have colourful and personal designs in the kitchen.Please refer to packaging label for country of origin.Complete with UTRUSTA 110° hinge with built-in damper for kitchen, 2-pack, sold separately.To be completed with 2 hinges.Each door size has its predetermined pattern. Since there are more doors than patterns, 2 door sizes have the same pattern.Designer The graphic patterns printed on YTTERBYN kitchen cabinet doors are created by 10-gruppen, a pioneering Swedish design group that added textile patterns in home decoration already in the 1970s. Over the years, 10-gruppen has also collaborated with IKEA and a few years ago we had the opportunity to purchase 150 of the group's timeless patterns. Five of them have now become graphical standouts on kitchen cabinet doors that can easily update your kitchen.  Read More
"10-gruppen's patterns are a real treasure in our portfolio", says Anki Holmqvist, who works with the kitchen range at IKEA. Together with her colleagues, she chose the patterns for the new kitchen cabinet doors from the large portfolio. "We chose five patterns with different tones and expressions ― yet still look good together", explains Anki.

An easy way to change

When 10-gruppen started, they challenged the traditional textile industry's standards and created something entirely new which made a big mark at the time. One of the group’s founders, graphic designer Tom Hedqvist, tells us that the group was inspired by art, fashion and popular culture. "Our idea when we first developed our textile collections was that patterns could be used throughout the home and that they’re a simple and affordable way to change interior design", says Tom. "I still like that idea."

Inspiration for patterns is everywhere

All group members had their own style and Tom has always worked with geometric patterns as his style. He created five of the patterns now used for YTTERBYN and one is by his colleague Ingela Håkansson Lamm. Tom still recalls how they came to life. "I've always been inspired by the everyday things that surround us, things that not everyone may notice. The idea for the box with rounded corners came from a construction safety grate I saw on my way to work one morning. Patterns are found everywhere around us. You just have to keep your eyes open.”
Read less