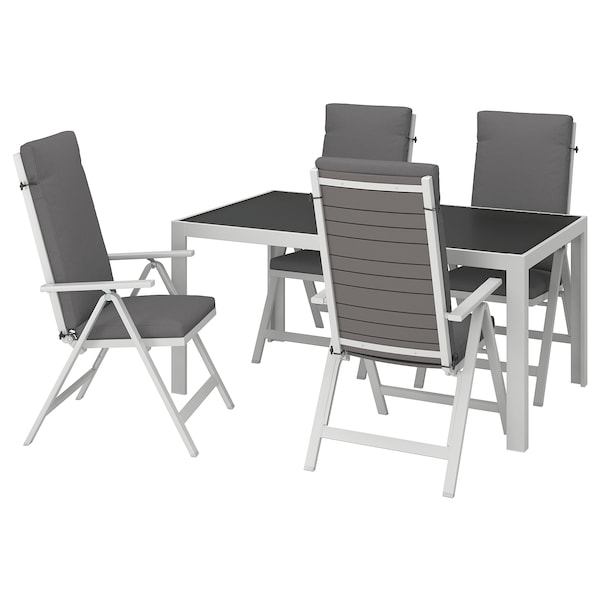 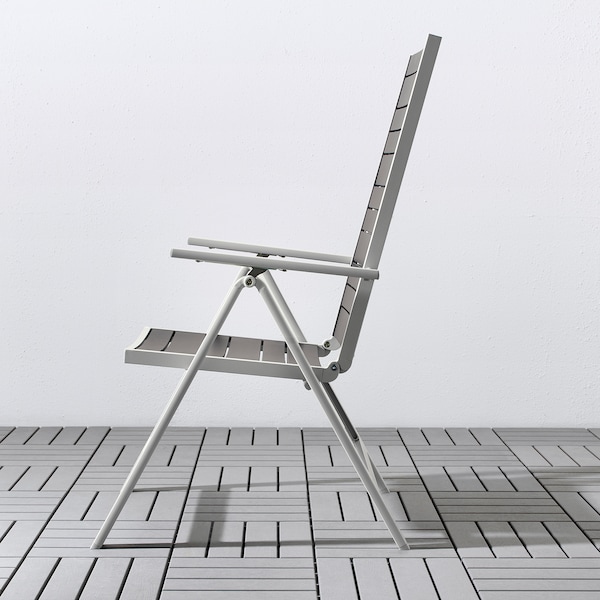 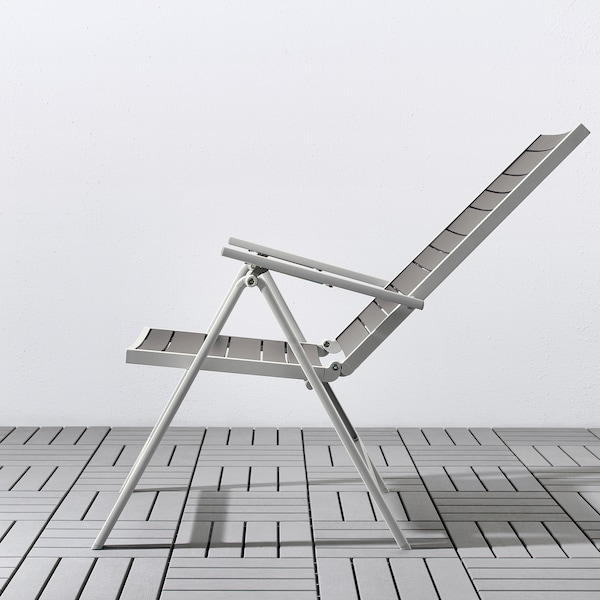 The table top in laminated glass is stain resistant and easy to clean.

The back of the chair can be adjusted to six different positions.

Easy to fold up and put away.

The chair comes pre-assembled, so you can start using it immediately.

The hole in the middle of the table top keeps your parasol in place.

You can choose between table tops in different materials, depending on what suits you and your patio ‒ and if you prefer a maintenance-free material like aluminum or the warmth of durable eucalyptus.

Easy to keep clean – just wipe with a damp cloth.

The materials in this outdoor furniture require no maintenance.

The furniture is sturdy, lightweight and maintenance-free, as it is made of rustproof aluminium.

Handle with care! A damaged edge or scratched surface can cause the glass to suddenly crack and/or break. Avoid collisions from the side - this is where the glass is most vulnerable.

Close the zipper before washing.

Do not tumble dry.

The best way to extend the life of your outdoor furniture is by cleaning it regularly and not leaving it outdoors unprotected more than necessary.

Clean: With a mild soapy solution.

Storing: If possible, store in a cool dry place indoors. If the furniture is stored outside, cover it with a waterproof cover. After a rain or snowfall, wipe off excess water or snow from flat surfaces. Allow air to circulate to avoid condensation.

By using recycled polyester in this product, we consume less new raw materials and lower our environmental footprint.

The yarn in this product is dope-dyed, a colour method for synthetic fibres, which reduces consumption of water and dyestuff while improving colour fastness compared to traditional dyeing techniques.

Product is possible to recycle or use for energy recovery, if available in your community.

Article no Other documents Problems we like
Sometimes things don’t go the way we expect when we create our products. Like with SJÄLLAND outdoor furniture. When we were almost ready with the development and thought we had straightened out all the question marks, our own designer didn’t manage to assemble one of the products the right way. Yes, we’re blushing a bit, but this blunder turned out to be a good thing.
When we want to move life to the garden or the balcony we shouldn’t have to worry about fixing up the outdoor furniture too much before we can relax and go ah… And it ought to be simple to fit the furniture back into crammed garages or under covers when the warm season is over. To get the care-free chairs and tables that most of us appreciate, we created SJÄLLAND. But, when David Wahl, the designer, started working with the collection, he didn’t realise that he and the development team were in for a hurdle-race of obstacles.

One of the first things David put in the design was an armrest on the chairs. It’s made of aluminium and bent two times to create an angle that makes it easier to sit down and get up, especially around a table. It’s also twisted to make the chair stackable. The bends and twists added function, but also created some headache for David’s colleague, Phuong Nguyen Thanh. Phuong was the technician on the team and his task was to make sure that the design and the materials work well together. “When I first saw David’s design I said to myself ‘Oh no, that’s impossible! There isn’t a machine that can bend aluminium like that,’” remembers Phuong.

Problem with bends straightened out

But, the team also felt the bends and twists were worth fighting for. And many people think armrests are really comfortable – so they decided to push on with the design anyway. “Our suppliers adjusted the machines they had to get the armrest just right. The first prototype turned out quite ugly to be honest, but nearly 30 trials later we managed to nail it,” laughs David.

Hmm, should we really mention this?

When the team finally had most things in place, David made one more discovery. “It’s a bit embarrassing, but I assembled the table incorrectly,” he says. “I took a picture of it, sent it to the team and said ‘Hey, I found a way to put it together the wrong way!’ I think they assumed that I had tested the construction, but I just wanted to see what it looked like with all pieces in place. The table is not hard to assemble, my mind must have been elsewhere, and to my defence I didn’t have the assembly instructions at hand,” confesses David.

The good part about the problems the team faced, is that they all led to improvements. The chair became stackable, and the assembly instructions super-clear – so no one needs to experience what David did. “It’s actually problems like this that we like. They make us better, and in the case of SJÄLLAND, they also make outdoor life easier”, says David.
More from the SJÄLLAND series
More Dining sets